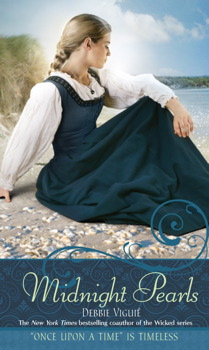 Once upon a time in the Kingdom of Aster a strange thing happened.

They say the prince married a girl who was not what she appeared and that another girl who saved the kingdom vanished without a trace. Some said it was witchcraft. Some said it was only a legend. For those who knew the truth, it was magic....

Rescued from the sea at an early age, Pearl grew up within sight of the water...and the castle. With her pale skin and silvery hair, she was an outcast in the village. Her only friend was a boy she met on the beach -- a young prince named James, who understood Pearl's desire just to be like everyone else.

Their friendship is viewed from afar by many: a disdainful king, Pearl's worried foster parents, a jealous young mermaid, a lovestruck merman, and the powerful sea witch. Now a storm brews in the kingdom, with a tidal force that could keep Pearl and James apart.

Under the Sea: 8 Little Mermaid Retellings to Swim Away with
Amy Beaudoin April 26, 2017

The 15 Secret Princesses of YA