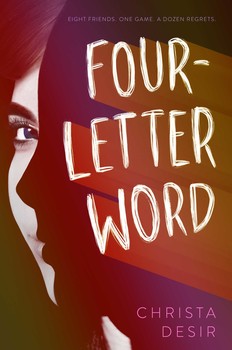 Eight friends. One game. A dozen regrets. And a night that will ruin them all, in this high stakes gripping story of manipulation and innocence lost, from the author of Bleed Like Me.

Chloe Sanders has wasted the better part of her junior year watching her best friend Eve turn away from her for the more interesting and popular Holly Reed. Living with her grandparents because her parents are currently serving as overseas volunteers, Chloe spends her days crushing on a dark-haired guy named Mateo, being mostly ignored by Eve and Holly, and wishing the cornfields of Iowa didn’t feel so incredibly lonely.

But shortly after spring break, a new girl transfers to her high school—Chloe Donnelly. This Chloe is bold and arty and instantly placed on a pedestal by Eve and Holly. Now suddenly everyone is referring to Chloe Sanders as “Other Chloe” and her social status plummets even more.

Until Chloe Donnelly introduces all her friends to a dangerous game: a girls vs. guys challenge that only has one rule—obtain information by any means necessary. All the warning bells are going off in Other Chloe’s head about the game, but she’s not about to commit social suicide by saying no to playing.

Turns out the game is more complicated than Other Chloe thinks. Chloe Donnelly hates to lose. She's got power over everyone—secrets she’s exploiting—and she likes to yank their strings. Only soft-spoken Mateo is sick of it, and when the game turns nasty, he chooses Other Chloe to help him expose everything Chloe Donnelly has done. But neither realize just how much the truth could cost them in the end.

Must-Read Books That Went On Sale in July 2020

8 Lady of the Lake Facts That You (Probably) Didn't Know

What Character Would You Be in a YA Thriller?