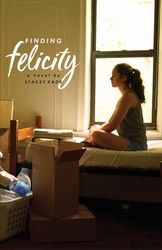 Felicity meets Fangirl in this contemporary novel about a young woman who must leave behind her fantasy life—inspired by her favorite WB show from the 1990s—and create a real one at college.

Caroline Sands has never been particularly good at making friends. And her parents’ divorce and the move to Arizona three years ago didn’t help. Being the new girl is hard enough without being socially awkward too. So out of desperation and a desire to please her worried mother, Caroline invented a whole life for herself—using characters from Felicity, an old show she discovered online and fell in love with.

But now it’s time for Caroline to go off to college and she wants nothing more than to leave her old “life” behind and build something real. However, when her mother discovers the truth about her manufactured friends, she gives Caroline an ultimatum: Prove in this first semester that she can make friends of the nonfictional variety and thrive in a new environment. Otherwise, it’s back to living at home—and a lot of therapy.

Armed with nothing more than her resolve and a Felicity-inspired plan, Caroline accepts the challenge. But she soon realizes that the real world is rarely as simple as television makes it out to be. And to find a place where she truly belongs, Caroline may have to abandon her script and take the risk of being herself.