Have you ever been asked what book universe you’d like to live in? Mine’s the world of Harry Potter—post 7th book—no contest (have you seen my profile picture?). But there’s a surprising lack of books I’d actually like to live in because so many contain horrific situations that NO ONE wants to be a part of. This is especially true when it comes to dystopias. I mean, you couldn’t pay me to walk into The Hunger Games universe, pre OR post Mockingjay. It also goes for utopias, because HELLO, they’re definitely just secretly dystopias. Take Want by Cindy Pon for example, in which the rich can buy longer lives because they can afford special suits to protect them from pollution and viruses in the world.  Those who can afford suits probably feel like they’re living in the perfect utopian society since basically nothing can touch them, but ask the people who can’t afford them, like Want’s main character Jason Zhao, and you’re looking at a dystopian nightmare. Is it an absolutely compelling and enthralling dystopian nightmare? ABSOLUTELY! Would I walk into it even if given my own functional wizard wand? No way. Read the extended excerpt of Want until July 3rd to learn more about this crazy world.

Here are 5 more dystopian societies I NEVER want to set foot in (but I will read about them because I enjoy nice things).

In the ruins of a place once known as North America lies the nation of Panem, a shining Capitol surrounded by twelve outlying districts. The Capitol is harsh and cruel and keeps the districts in line by forcing them all to send one boy and one girl between the ages of twelve and eighteen to participate in the annual Hunger Games, a fight to the death on live TV. Sixteen-year-old Katniss Everdeen, who lives alone with her mother and younger sister, regards it as a death sentence when she is forced to represent her district in the Games. But Katniss has been close to dead before-and survival.

In an alternate United States, love has been declared a dangerous disease, and the government forces everyone who reaches eighteen to have a procedure called the Cure. Living with her aunt, uncle, and cousins in Portland, Maine, Lena Haloway is very much looking forward to being cured and living a safe, predictable life. She watched love destroy her mother and isn't about to make the same mistake.

But with ninety-five days left until her treatment, Lena meets enigmatic Alex, a boy from the Wilds who lives under the government's radar. What will happen if they do the unthinkable and fall in love? 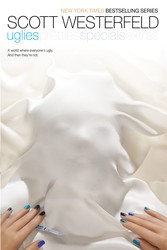 Tally is about to turn sixteen, and she can't wait. Not for her license—for turning pretty. In Tally's world, your sixteenth birthday brings an operation that turns you from a repellent ugly into a stunningly attractive pretty and catapults you into a high-tech paradise where your only job is to have a really great time. In just a few weeks Tally will be there.

But Tally's new friend Shay isn't sure she wants to be pretty. She'd rather risk life on the outside. When Shay runs away, Tally learns about a whole new side of the pretty world—and it isn't very pretty. The authorities offer Tally the worst choice she can imagine: find her friend and turn her in, or never turn pretty at all. The choice Tally makes changes her world forever.

Other Books In This Series:

For thirty-five girls, the Selection is the chance of a lifetime. The opportunity to escape the life laid out for them since birth. To be swept up in a world of glittering gowns and priceless jewels. To live in a palace and compete for the heart of gorgeous Prince Maxon.

But for America Singer, being Selected is a nightmare. It means turning her back on her secret love with Aspen, who is a caste below her. Leaving her home to enter a fierce competition for a crown she doesn't want. Living in a palace that is constantly threatened by violent rebel attacks.


Then America meets Prince Maxon. Gradually, she starts to question all the plans she's made for herself—and realizes that the life she's always dreamed of may not compare to a future she never imagined.

Jonas lives in a seemingly ideal, if colorless, world of conformity and contentment. There is no sadness or pain and everyone is satisfied to do their job. But when Jonas is chosen as the Receiver of Memory, he learns the dark, complex secrets behind his fragile community.