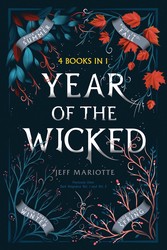 Year of the Wicked

In the tradition of The Chilling Adventures of Sabrina and Riverdale, this magical bind-up includes all four novels in the Witch Season series filled with spellbinding romance, revenge, and of course, witches!

A witches’ war is brewing…

And it’s coming straight towards Kerry and her friends at their summertime home. Along with it is Daniel Blessing. Mysterious, charismatic, and handsome Daniel is on the run from a powerful witch named Season.

Kerry and her friends don’t believe in witches and spells, but Kerry can’t help believing in Daniel…and falling for him.

But falling for Daniel pulls Kerry into a feud his family has been waging for generations. A dark feud of passion, magic, and revenge. Suddenly it becomes clear that Season isn’t after just Daniel, she wants Kerry and her friends dead too. Because, though Kerry doesn’t know it yet, she might just be the only one with the power to uncover the truth—and end the witches’ war once and for all.

13 Witchy YA Reads to Get You Ready for Halloween
Sam Benson October 21, 2020

What Fall Book Should You Read?
The Riveted Team November 5, 2019