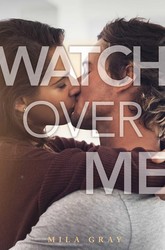 From the author of Come Back to Me comes a striking new novel about a young woman— desperately trying to protect her family from their violent father—who finds safety, and a passionate romance, with an ex-Marine.

Ever since Zoey was a kid she’s been caring for her mom and her little sister, defending them from her violent father. She’s been the strong one, the responsible one as she sacrificed her wants and dreams to keep her family together.

Now the life they’ve built for themselves in California is about to be upended. Her father, just released from prison, has discovered where they’re hiding and has come looking for them.

Enter Tristan. A former Marine and now member of the Coast Guard, Tristian promises his best friend, and Zoey’s Marine brother, that he will take care of Zoey and her family. Protect them, watch over them, and be the rock they need in their lives.

And as Tristan starts to help Zoey deal with the emotional fall out of her childhood, their relationship turns from protector to something more. The two grow closer as a romance blooms into a heart-pounding and powerful relationship that Zoey hopes will be strong enough to fight off the damage her father has done to her and her family.

But not everyone can be kept safe forever, and when Zoey’s father does show up, a confrontation ensues that will change Zoey’s world forever.

This Author Has a Romance For Every Occasion
Annika Voss November 18, 2019

Your First Look At All the Covers for Our Fall 2019 YA Books
The Riveted Team February 1, 2019