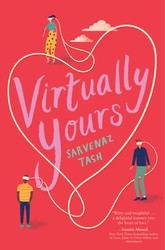 Modern love plus online anonymity is a recipe for romantic disaster in this lighthearted new romance from the author of The Geek’s Guide to Unrequited Love.

How bad can one little virtual lie be?

NYU freshman Mariam Vakilian hasn’t dated anyone in five months, not since her high school sweetheart Caleb broke up with her. So, when she decides to take advantage of an expiring coupon and try out a new virtual reality dating service, it’s sort of a big deal.

It’s an even bigger deal when it chooses as one of her three matches none other than Caleb himself. That has to be a sign, right? Except that her other match, Jeremy, just happens to be her new best friend IRL. Mariam’s heart is telling her one thing, but the app is telling her another. So, which should she trust? Is all fair in modern love?

Pick a Netflix Original and Get a Book Rec
Cassandra Fernandez April 22, 2020