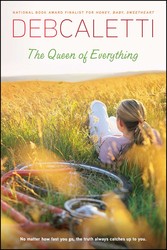 The Queen of Everything

People ask me all the time what having Vince MacKenzie for a father was like. What they mean is, was he always crazy?

High school junior Jordan MacKenzie's life was pretty typical: fractured family, new boyfriend, dead-end job. She'd been living with her father (the predictable optometrist) since her mother (the hippie holdover) had become too embarrassing to be around. Jordan felt that she finally had as normal a life as she could. Then came Gayle D'Angelo.

Jordan knew her father was dating Gayle and that Gayle was married. Jordan knew it was wrong and that her father was becoming someone she didn't recognize anymore, but what could she do about it? And how could she -- how could anyone -- have possibly guessed that this illicit love affair would implode in such a violent and disturbing way?

The Queen of Everything