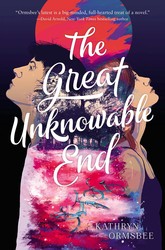 From the author of Tash Hearts Tolstoy comes a funny, moving novel about the lengths we’ll go to make dreams our dreams come true that’s perfect for fans of Shaun David Hutchinson and Rainbow Rowell.

Slater, Kansas, is a small town where not much seems to happen.

Stella dreams of being a space engineer. After Stella’s mom dies by suicide and her brother runs off to Red Sun, the local hippie commune, Stella is forced to bring her dreams down to earth to care for her sister, Jill.

Galliard has only ever known life inside Red Sun. There, people accept his tics, his Tourette’s. But when he’s denied Red Sun’s resident artist role, which he believed he was destined for, he starts to imagine a life beyond the gates of the compound...

The day Stella and Galliard meet, there is something in the air in their small town. Literally. So begin weeks of pink lightning, bloodred rain, unexplained storms...And a countdown clock appears mysteriously above the town hall. With time ticking down to some great unknowable end they’ll each have to make a choice.

If this is really the end of the world, who do they want to be when they face it?

These 8 Books Will Speak to Your Inner Weirdo
Caroline Osborn September 24, 2019