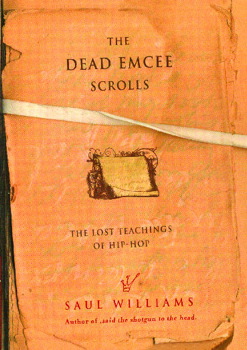 In the underground labyrinths of New York City's subway system, beneath the third rail of a long forgotten line, Saul Williams discovered scrolls of aged yellowish-brown paper rolled tightly into a can of spray paint. His quest to decipher this mystical ancient text resulted in a primal understanding of the power hip-hop has to teach us about ourselves and the universe around us.

Now, for the first time, Saul Williams shares with the world the wonder revealed to him by the Dead Emcee Scrolls.

I have paraded as a poet for years now. In the proc ess of parading I may have actually become one, but that's another story, another book. This book is a book that I have been waiting to finish since 1995. This is the book that finished me. The story I am about to tell may sound fantastic. It may anger some of you who have followed my work. You may feel that you have come to know me over the years, and in some cases you have, but in others...well, this is a confession.