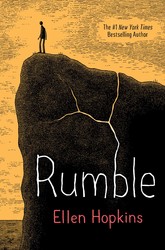 His younger brother Luke was bullied mercilessly after one of Matt’s friends outed Luke to the whole school, and when Luke called Matt—on the brink of suicide—Matt was too wrapped up in his new girlfriend to answer the phone. Now Luke is gone, and Matt’s family is falling apart.

No matter what his girlfriend Hayden says about forgiveness, there’s no way Matt’s letting those he blames off the hook—including himself. As Matt spirals further into bitterness, he risks losing Hayden, the love of his life. But when her father begins to pressure the school board into banning books because of their homosexual content, he begins to wonder if he and Hayden ever had anything in common.

With brilliant sensitivity and emotional resonance, bestselling author Ellen Hopkins’s Rumble explores bullying and suicide in a powerful story that examines the value of forgiveness and reconciliation.