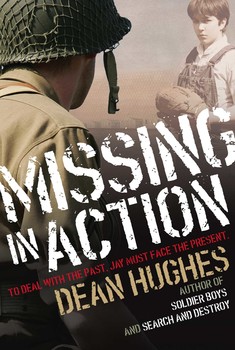 A boy confronts prejudice and intolerance in this striking, “emotionally honest coming-of-age story” (Publishers Weekly) set on the American homefront during World War II, from the acclaimed author of Search and Destroy and Soldier Boys.

Jay Thacker is used to being called names because his dad is half Navajo. But he gets a chance at a new life and a new identity when he and his mom move to the small town of Delta, Utah, to live with Jay’s grandfather. In Delta, Jay can convince everyone, and maybe even himself, that his dad—who is missing in action as he fights in WWII—is really a POW and military hero, and not gone forever.

As the summer wears on and Jay finds himself growing up a little faster than he expected, he learns to look at some truths that had previously been impossible to face. Truths about his father; about Ken, his new friend from the Japanese internment camp nearby; and about himself, too.

In this understated and moving story, Dean Hughes offers a glimpse at the choices a boy must make as he decides what kind of man he’ll one day be.