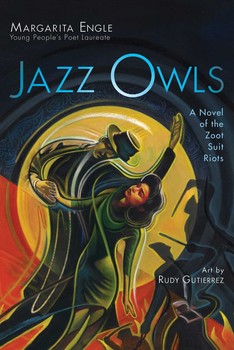 From the Young People’s Poet Laureate Margarita Engle comes a searing novel in verse about the Zoot Suit Riots of 1943.

Thousands of young Navy sailors are pouring into Los Angeles on their way to the front lines of World War II. They are teenagers, scared, longing to feel alive before they have to face the horrors of battle. Hot jazz music spiced with cool salsa rhythms calls them to dance with the local Mexican American girls, who jitterbug all night before working all day in the canneries. Proud to do their part for the war effort, these Jazz Owl girls are happy to dance with the sailors—until the blazing summer night when racial violence leads to murder.

Suddenly the young white sailors are attacking these girls’ brothers and boyfriends. The cool, loose zoot suits they wear are supposedly the reason for the violence—when in reality these boys are viciously beaten and arrested simply because of the color of their skin.

In soaring images and powerful poems, this is the breathtaking story of what became known as the Zoot Suit Riots as only Margarita Engle could tell it.