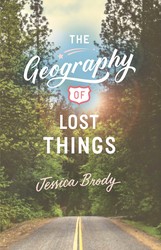 The Geography of Lost Things

In this romantic road trip story perfect for fans of Sarah Dessen and Morgan Matson, a teen girl discovers the value of ordinary objects while learning to forgive her absent father.

After Ali’s father passes away, he leaves his one and only prized possession—a 1968 Firebird convertible—to his daughter. But Ali doesn’t plan on keeping it. Not when it reminds her too much of all her father’s unfulfilled promises. So when she finds a buyer three hundred miles up the Pacific coast willing to pay enough money for the car to save her childhood home, Ali can’t wait to get going. Except Ali has no idea how to drive a stick shift. But guess who does?

Ali’s ex-boyfriend, Nico. And Nico has other plans.

He persuades Ali that instead of selling the car, they should “trade up” the items they collect on their trip to eventually reach the monetary amount Ali needs. Agreeing with Nico’s crazy plan, Ali sets off on a unique adventure that is unlike anything she ever could have expected.

And it’s through Ali’s travels, through the strangers she meets and the things that they value—and why they value them—that Ali eventually comes to understand her father and how his life may not have been as easy and carefree as she previously thought. Because just like the seemingly insignificant objects Ali collects, not everything is exactly as it appears.

Must-Read YA Books That Went on Sale This October
Nicole Benevento November 1, 2018