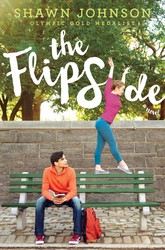 From gold medalist and reality TV star Shawn Johnson comes a debut YA novel inspired by her own experiences as an elite teenage gymnast—just in time for the Summer 2016 Olympic games.

Charlie Ryland has a secret.

She may seem like your average high school sophomore—but she’s just really good at pretending.

Because outside of school Charlie spends all her waking hours training to become one of the best gymnasts in the world. And it’s not easy flying under the radar when you’re aiming for Olympic gold…especially when an irresistible guy comes along and threatens to throw your whole world off balance.

Inspired by her own experiences as a fifteen-year-old Olympic gymnast, gold medalist Shawn Johnson writes a delightfully entertaining novel about chasing big dreams and falling in love, all while trying to keep it real.