The Fairest of Them All: 5 Snow White Retellings You’ll Love

It’s Princess Week, and I am so excited to use this as an excuse to talk about Snow White because her story holds a special place in my heart. For a couple of summers in my teens, I got to play Snow White at a fairytale festival for kids. As glamorous as it sounds—signing autographs, taking photos, making dreams come true—I discovered there’s a dark side to being a princess. Performing outside in July wearing a long, thick dress and getting kissed (drooled on) by Prince Charming (a guy younger than me with a big crush) 6 times a day really puts it all into perspective. It’s a good thing I did a bunch of character research (yep. nerd.) and read every Snow White retelling I could find to prepare myself for any potential unmagical sides of the fairy tale. While lying, fake-comatose and drooled upon, on a wooden stage isn’t exactly having your stepmother try to kill you, it is pretty rough. Take my advice and thank your lucky stars you can just read this dark, enchanting tale, and you don’t have to live it.

When you’re done doing that, check out my list of favorite Snow White retellings and let me know what you think in the comments! Did I miss any of your favorites?

Once upon a time, there was a girl who wanted to be pretty . . .

Aza's singing is the fairest in all the land, and the most unusual. She can "throw" her voice so it seems to come from anywhere. But singing is only one of the two qualities prized in the Kingdom of Ayortha. Aza doesn't possess the other: beauty. Not even close. She's hidden in the shadows in her parents' inn, but when she becomes lady-in-waiting to the new queen, she has to step into the light—especially when the queen demands a dangerous favor. A magic mirror, a charming prince, a jealous queen, palace intrigue, and an injured king twine into a maze that Aza must penetrate to save herself and her beloved kingdom. 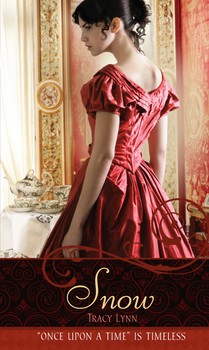 In a tiny Welsh estate, a duke and duchess lived happily, lacking only a child -- or, more importantly, a son and heir to the estate. Childbirth ultimately proved fatal for the young duchess. After she died, the duke was dismayed to discover that he was not only a widower, but also father to a tiny baby girl. He vowed to begin afresh with a new wife, abandoning his daughter in search of elusive contentment.

Independent -- virtually ignored -- and finding only little animals and a lonely servant boy as her companions, Jessica is pale, lonely and headstrong...and quick to learn that she has an enemy in her stepmother. "Snow," as she comes to be known, flees the estate to London and finds herself embraced by a band of urban outcasts. But her stepmother isn't finished with her, and if Jessica doesn't take control of her destiny, the wicked witch will certainly harness her youth -- and threaten her very life....

Princess Winter is admired by the Lunar people for her grace and kindness, and despite the scars that mar her face, her beauty is said to be even more breathtaking than that of her stepmother, Queen Levana.

Winter despises her stepmother, and knows Levana won't approve of her feelings for her childhood friend--the handsome palace guard, Jacin. But Winter isn't as weak as Levana believes her to be and she's been undermining her stepmother's wishes for years. Together with the cyborg mechanic, Cinder, and her allies, Winter might even have the power to launch a revolution and win a war that's been raging for far too long.

Can Cinder, Scarlet, Cress, and Winter defeat Levana and find their happily ever afters? Fans will not want to miss this thrilling conclusion to Marissa Meyer's national bestselling Lunar Chronicles series.

A daring rescue. A difficult choice.

Sophie desperately wants to get away from her stepmother’s jealousy, and believes escape is her only chance to be happy. Then a young man named Gabe arrives from Hagenheim Castle, claiming she is betrothed to his older brother, and everything twists upside down. This could be Sophie’s one chance at freedom—but can she trust another person to keep her safe?

Gabe defied his parents Rose and Wilhelm by going to find Sophie, and now he believes they had a right to worry: the girl’s inner and outer beauty has enchanted him. Though romance is impossible—she is his brother’s future wife, and Gabe himself is betrothed to someone else—he promises himself he will see the mission through, no matter what.

When the pair flee to the Cottage of the Seven, they find help—but also find their feelings for each other have grown. Now both must not only protect each other from the dangers around them—they must also protect their hearts.

Lorelai Diederich, crown princess and fugitive at large, has one mission: kill the wicked queen who took both the Ravenspire throne and the life of her father. To do that, Lorelai needs to use the one weapon she and Queen Irina have in common—magic. She’ll have to be stronger, faster, and more powerful than Irina, the most dangerous sorceress Ravenspire has ever seen.

In the neighboring kingdom of Eldr, when Prince Kol’s father and older brother are killed by an invading army of magic-wielding ogres, the second-born prince is suddenly given the responsibility of saving his kingdom. To do that, Kol needs magic—and the only way to get it is to make a deal with the queen of Ravenspire, promise to become her personal huntsman…and bring her Lorelai’s heart.

But Lorelai is nothing like Kol expected—beautiful, fierce, and unstoppable—and despite dark magic, Lorelai is drawn in by the passionate and troubled king. Fighting to stay one step ahead of the dragon huntsman—who she likes far more than she should—Lorelai does everything in her power to ruin the wicked queen. But Irina isn’t going down without a fight, and her final move may cost the princess the one thing she still has left to lose.

Are You The Nerdiest Of Them All?

8 Things You Need to Know About Kiersten White’s New…

10 Foreign Covers so Beautiful We Wish We Could Own Them

The Fairest of Them All: 5 Snow White Retellings You’ll Love