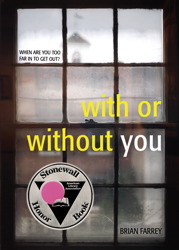 With or Without You

When are you too far in to get out?

Eighteen-year-old Evan and his best friend, Davis, get beaten up for being loners. For being gay. For just being themselves. But as rough as things often seem, at least Evan can take comfort in his sweet, sexy boyfriend Erik —whom he’s kept secret from everyone for almost a year.

Then Evan and Davis are recruited to join the Chasers, a fringe crowd that promises them protection and status. Davis is swept up in the excitement, but Evan is caught between his loyalty to Davis and his love for Erik. Evan has lied to keep his two worlds separate. Now his lies are about to implode…and destroy the very relationships he’s been trying to protect.

With Or Without You rules
Hit the ground. Curl into a ball. Cover your head. Don’t cry. Ever. All this I know. It is instinct, as automatic as any breath, any blink, any beat of the heart. I repeat eighteen years’ worth of these hard-learned lessons over and over in my head, waiting for the hail of blows to stop. I worry it won’t be enough. Over the war cries and laughs from above, I hear a whimper. It’s Davis. He’s nearby and while I can’t see him, I know he’s gone fetal, mirroring my position on the ground. I’m still, silent. I offer no sport. But Davis just made a mistake. His groan earns him the undivided attention of our attackers. I venture one impossibly short glance out between my elbows. Four different pairs of feet launch into a vicious, steel-toed assault on my best friend. “You got something to say, faggot?” Pete Isaacson, of course. I dare another look and see five of them total. The usual suspects. Pete’s mob from the wrestling team: the troglodytes. Pete lords over them all in his trademark bowling shoes, burnished emerald and ochre. Two glints of gun-metal silver, dog tags on a chain around his neck, shoot the sun’s reflection like a laser. He’s grinning. “Come on, faggot. Lemme hear you howl.” When Davis doesn’t answer, Pete stomps on Davis’s hip, eliciting a scream. I’m too sore to take in a breath. I can only send silent pleas to Davis: Shut up, shut up, shut up. Davis sobs. The savage blows pitch his short, skinny body this way and that. Don’t cry. Ever. I’ve never cried during a beating. I used to think that I didn’t want to give them the satisfaction of knowing they’d hurt me. The real reason? Crying solves nothing. I only do things that make a difference. Like now. When I summon the strength to cough. The effect is instantaneous. Three of the trogs break off and renew their assault on me. One of them falls to his knees, pummeling the side of my head and my right arm with his fists. A year and a half ago, Kenny Dugan broke that arm when he slammed me into a locker. That might be him now, trying to recapture the glory. So, I do all I can do. I take a diversion. LOCAL TEEN DEAD IN
GAY-BASHING INCIDENT Madison, Wis.—Authorities are questioning five local wrestlers in the death of Evan Weiss, a senior at Monona High School. Just one day before all six were set to graduate, the students are facing charges of first-degree murder in what authorities are describing as a clear case of gay bashing. Weiss and his best friend, Davis Grayson, were walking home after the last day of school when the suspects allegedly jumped the pair in a field behind the school and beat them. Grayson remains hospitalized in critical care. Perhaps most tragic is that Weiss died mere blocks from the state capitol, where Governor Doyle Petersen is days away from signing major hate-crime legislation into law. When asked to comment on the incident, Governor Petersen said, “It’s difficult to comment without all the facts. But once these boys are found guilty, I plan to lobby for the death penalty and see those little fuckers fry.”   My self-inflicted fantasy does the trick and carries me away into unconsciousness. I don’t know how much later it is when I feel someone gently prodding my chest. I move and my body explodes. A discharge of pain from my shoulder leaves my right arm flaccid. I wail and pull it to my chest. I look up at Davis. His left eye is swollen; it’ll be completely shut by morning. His sandy blond hair juts out in every direction, decorated with grass clippings. Dark streaks crisscross his face like war paint and, with the sun disappearing behind trees and houses, shadow and blood fuse into one. “A car drove by and they freaked.” His whisper is like grinding glass. “You were out. I didn’t know what to do.” He holds out his hand to help me up but I shrink away, keeping my right arm against my chest. He sees this. “Is it broken?” I vividly remember what it felt like when Kenny broke it—a river of knives flowing up to my shoulder—and this does not feel like that. I shake my head and, using my good arm, push off the ground. We stand facing each other for a moment, each fading into a silhouette. We limp back to my house.

With or Without You